Fluorescence-guided surgery: Use and Cholangiography Options for Better Outcomes in Lap Cholecystectomy

According to the General Surgery News and a recent article about FGS¹, Fluorescence-guided surgery is a newer imaging technology that helps to increase visualization during procedures, helping surgeons to better analyze tissue and even detect tumors. It is safe and easy to use and can be applied to almost any specialty.

How does it work? A fluorescent dye is introduced into the body and a specific optical system is used to capture light images of a certain wavelength. For years, only white light was used in surgery and the limitations are that white light cannot penetrate blood and tissue for more than a few microns. More specifically, Fluorescence-guided surgery uses a compound called a fluorophore, which is a molecule that can absorb light at a particular wavelength, exciting the electrons to a temporary higher energy state. This allows certain wavelengths to be visualized, giving surgeons the ability to target and image cancer cells, blood flow and other structures that may not otherwise be visible. 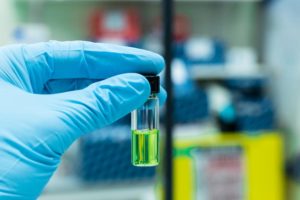 In the case of cholecystectomy, ICG, an indocyanine green dye, is sometimes used and injected intravenously. Da Vinci robotics uses Fluorescence-guided surgery technology, which they call Firefly®, during colorectal surgery to identify structures, (specifically ducts and vasculature), since anatomical structures vary so much. As this article states, “Unfortunately, bile duct injuries still occur…. because the cystic duct and main bile duct are misidentified.” ¹

Surgeons may be using this technology in a laparoscopic or robotic cholecystectomy to better visualize anatomy and potential issues, such as stones. Fluorescence-guided surgery may enhance identification of the common bile duct (CBD) and cystic duct anatomy, but it may not be the ideal choice for identification of gall stones in the CBD.

In the process of writing this blog, I contacted Danny Sherwinter, M.D., Minimally Invasive & Bariatric Surgeon & CEO of Brainchild Surgical Devices, LLC. for his professional opinion on this matter, and he said: “For this reason. FGS will not supplant cholangiography, which will still be needed to visualize stones in the Bile Duct which are most commonly in the distal duct, which is covered by the pancreas small bowel, etc. I would look at the two technologies as complimentary with FGS cholangiography used for anatomical clarification and X-ray cholangiography for looking for stones.”

“One of the areas in which FGS is frequently used is hepatobiliary surgery. Laparoscopic cholecystectomy is one of the most common procedures performed worldwide. Unfortunately, bile duct injuries still occur, ranging between 0.4% and 1% (Figures 3A and 3B). The majority occur because the cystic duct and main bile duct are misidentified.13,14 It has been shown recently that FGS can increase visualization of the extrahepatic bile ducts threefold compared with white light.” ¹

Cholangiography remains an important component of cholecystectomy procedures and the PMI SURGLINE® product offering includes several PMI Cholangiography options, including percutaneous, laparoscopic, and open cholangiogram devices. In addition, the versatile The PMI Cholangiogram Grasper may save OR time, eliminating the time-consuming process of cystic ductotomy and providing a cost effective surgical solution. 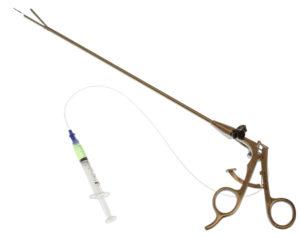 The PMI Cholangiogram Grasper is a multi-purpose cholangiography device that:

PMI SURGLINE® has solutions for most aspects of a laparoscopic or robotic specimen removal.

Contact us for further information on the PMI Cholangiography Grasper.

Progressive Medical, Inc. (PMI) and the PMI SUPERBAG®: Reflections on a Successful Year